The MARQUE M155 works with most smartphones like the iPhones or Android phones (as long as they have a Bluetooth connectivity) and pairing can be done easily and flawlessly. The Plantronics MARQUE M155 is small in size and it’s easy to just chuck it into your shirt’s pocket when you are not using it. I often do that (or put it next to my keyboard) and when a call comes in, I can quickly grab the piece and use it straight away. There are only a few buttons on the headset, similar to the other Plantronics Bluetooth headsets that I reviewed in the past. The power control is a slider and marked with a red or green stripe to indicate the state of the power. This makes it easier to see whether you are leaving it on or off when it is not in your ear.

The MARQUE M155 is comfortable to use and you can pick from the different ear gels or install the optional ear hook. Once the headset is in your ear, it stays. At once, I went to the toilet while still talking with the MARQUE M155t without any fear of dropping it into the toilet bowl. The small round button on the body of the headset can be used for different purposes such as pairing the headset to a smartphone, ending a call, activating the voice commands on your Smartphones, and more. They are quite natural to remember and not overly complicated. I find that the voice activation is quite clunky though with iPhone 4S Siri. Holding the round main button and releasing it after a while activates Siri, which is great, but often when I said something, Siri did not take the command well. It’s as if it’s still reading the voice input, waiting for you to stop talking. I found out about this because I need to press the Siri button manually on my iPhone 4S after I finished giving it a command through the MARQUE M155. How to use Siri with Plantronics MARQUE M155? That’s a good question. I’m going to check it out with my contact at Plantronics and update this post as soon as I get a reply.

Apart from that, you can actually answer a call by saying “ANSWER” in case your hands are busy on the steering wheel or when you are doing something else.

There is only one volume button to go through different volume levels in steps. I’d personally prefer a higher and lower volume buttons as it can be tedious to cycle through until you get the right volume in different noise environment. You can also stream music with the Plantronics MARQUE M155 (A2DP-enabled phones) but don’t compare the quality with the other headphones solely dedicated for listening to music. I also find that the audio quality is so much better on the Plantronics BackBeat 903+, which is my favorite Plantronics headset (I lost it a few weeks ago *sigh*).

Nevertheless, if you are not an audiophile and just want to listen to some music while on calls every now and then, then you should be happy with MARQUE M155. 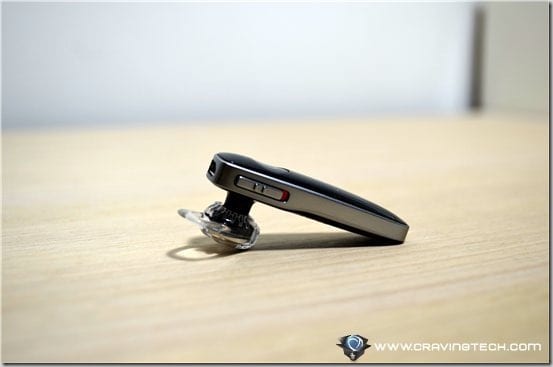 Plantronics MARQUE M155 is compact and sexy to look at. Pairing it with a smartphone is easy and it actually has a step by step voice guide the moment you turned the headset on for the first time. It’s also one of the most comfortable Bluetooth headsets to use and once it’s inside your ear, it stays firm. Whatever activities you are doing, I can guarantee that it will not come off from your ear. The audio quality is just mediocre (call and music) and there doesn’t seem to be any noise cancelling technology being built into the headset. So this headset would be best to use inside an indoor environment (such as home, in the car, or in the office). It also has an iPhone battery meter, voice alerts when the battery gets low, and a talk time of up to 5 hours.