Ever wonder how Humans, dwarves, elves, and orcs fight with each other a century from now? Dawn of War 2 can answer that question (minus the Dwarves but add the Aliens to the mix).

Warhammer 40k Dawn of War 2 is a semi RTS (Real Time Strategy) semi RPG (Role Playing Game). Instead of focusing on building massive variety armies and land destruction on your enemies, you are only given a handful squad (each has its own strength and weakness) to do the job.short, but memorable.
Please note that this is a review on the Dawn of War 2 single player campaign only as I haven’t tried the multiplayer yet.

Dawn of War 2 single player focuses only on the human side, the special marines, called the Blood Raven. They are the super human soldiers who are capable of fighting impossible tasks. You will be one of the Commanders commanding these soldiers to fight the Orks and Eldars (at first). A new type of enemy then arrives, called the Tyranids (or the Aliens). Their mission is like every other alien in movies/games: to eradicate every other living being in the galaxy. You, of course, have to prevent this from happening.

You can only bring 4 squads to each mission in Dawn of War 2 and every time you win the mission, the squad leader gains experience. Experience leads to levelling up, which means new perks and abilities. Each squad has different strengths and weaknesses. Cyrus’s squad, for example, is a scout-based squad. Meaning, plenty of stealth techniques and sniping. Avitus’ squad on the other hand, is a heavy weapon squad and focuses on laying destruction to your enemies, with a cost of mobility. During your first few hours of gaming, you’ll probably have a hard time trying to remember the names of your squad leaders as they sound pretty similar (I hope that you don’t name your character with “us” at the end too).

Each squad leader will get an experience whenever you’ve completed your mission. Although you can only bring 4 squads to each mission, squad leaders who didn’t go to the mission can still get some experience. It won’t be as many as those who went to the mission, though.

Once a squad leader is levelled up, you need to allocate points to where you want to focus the squad on. If you want a certain squad to focus on melee attack and damage, then you should distribute the points in Stamina and Strength, for example. The levelling system in Dawn of War 2 is very similar to Mass Effect: once you’ve reached a certain point, new trait/ability can be unlocked. Since you can see the whole tree, you can plan ahead. There is no turning back once you’ve confirmed the point’s allocation, so you cannot reset the points and refocus. There is also a level cap to all your squad leaders (including yourself) to level 20 and it simply means that you cannot maximize all possible points and abilities. So plan wisely.

In every Dawn of War 2 mission, you will find new weapons, armors, and items throughout the battle and also from the mission reward itself. These items (called WarGears) are both random and set, in which you can differentiate from the colors. If you play MMORPG games, then you’ll be familiar with these concepts. You’ll spend time dressing up your squad leaders in the loadout screen every time you complete a mission.

The weapons are varied from melee damage based weapons to heavy weaponry such as the plasma cannon and the rocket launcher. Items such as grenades, jet packs, and talismans can also be equipped to those who can use them. Old wargears can be sold for experience. So once you’re sure that you will never use a particular wargear anymore, simply sell it and every one will get a small experience as a bonus.

In Dawn of War 2, you’ll find the main missions and also the side missions. If you focus solely on the main campaign missions, then it will probably only take you a couple of days to finish the game. So you’d want to play the side missions as well not just to make sure that every penny you paid for this game is worth it, but also to get the bonus experience and better wargears.

The optional missions are either a “Defend” or an “Assault” mission. In Dawn of War 2, you can control a few installation structures on the planets and sometimes these installations will be under attacked. It’s your job to defend them not just for the sake of humanity, but for the sake of keeping these structures under your control. Controlling these structures will give you bonuses in your campaign such as the number of turrets that you can deploy each mission, intelligence on the enemies’ weaknesses, and so on.

Unfortunately in Dawn of War 2, you cannot save your game when you are on a mission. This can be frustrating at times but also provides a challenging style of gameplay. I actually enjoyed it so much. I’m so used to saving and loading a game when something doesn’t go according to my plan so this style of gameplay kept me on my toes. I also tried pressing “Alt F4” to quickly quit the game when I knew that I was going to fail the mission. Unfortunately, this didn’t work either and the mission was saved as Fail :)

One day will pass whenever you execute a mission (you can select the missions that you want to go for) so you need to plan the missions quite carefully. On each day, there will be events occurring (your sector gets attacked, etc). But if you totally “own” the mission (no one ever died or you completed the mission quickly), you can get another 1 or 2 extra deployments. Meaning, you can execute another mission on the same day and this should give you the advantage in the campaign. 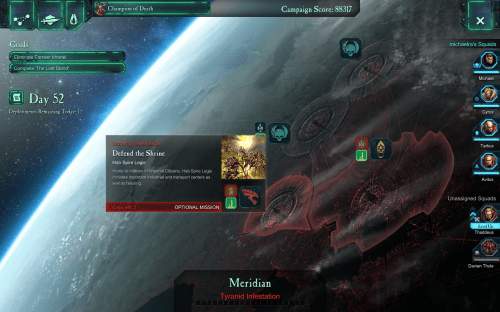 The missions are unfortunately, quite repetitive and can get boring at times. You and your squad are basically deployed at the bottom part of the map and all you have to do is kill the boss on the top of the mission map. Deploy, Cleanse, Repeat. The maps are not random too, so unfortunately you’ll find the exact same enemies in the exact spots on the map. There are some variations of maps though and since they look so beautiful, the repetitions are quite tolerable. Plus, you are doing it for the sake of your armies to get stronger. This motivates you enough to keep on playing and progressing through the chapters.

I haven’t tried the multiplayer unfortunately so you may want to search for other reviews on the web for this one. But yes, you can do these campaign missions cooperatively with your friends.

Dawn of War 2 is a stimulating and fun semi RTS semi RPG game. The game looks great and it’s also addictive. These addictions however, are sadly reduced by the repetitiveness of the missions. Thankfully, since you’ll be getting random wargears and also experience in every mission, this repetitiveness is quite tolerable. At least, it’s not as boring as Assassins Creed’s repetitive side quests.

Dawn of War 2 single player campaign is unfortunately short, especially if you don’t play the side missions much. So if you are not the type of person who likes to do online gaming, then you might want to reconsider renting the game instead.

Dawn of War 2 is addictive though and since it doesn’t take too much on your time (each mission varies from 6-15 minutes), this is probably the next strategy game that you want to grab if you need to juggle between gaming and your family :) If you have plenty of time however, then you might want to wait for the Empire: Total War. It’s just around the corner.

Dawn of War 2 Pros:
+ Fun & Addictive
+ Cooperative campaign missions
+ RPG elements put into RTS
+ No military & economic building (can also be a minus for those who like it, I guess)
+ Great graphics, great physics and ragdoll effects making the battle more fun & vicious at the same time

Dawn of War 2 Cons:
– Repetitive mission types
– Repetitive maps
– Short campaign
– Level 20 cap for each squad
– The supposedly best armor in the game, the Terminator Armor, is not really the best after all