XCOM Enemy Unknown review – XCOM Enemy Unknown is meant to be a remake of the back-in-the-good-old-days XCOM UFO Defense. XCOM UFO Defense was an excellent game back in the era of the 90s and it was one of the games that made me hook up to PC gaming (apart from DOOM II and Tie Fighter). I remember the excitement when the Independence Day movie (Will Smith) came out not long after I played the game. This totally brings back great memories.

The original was a great game and several attempts to remake the game have made fans (like me) cry and frustrated. That is, until now.

XCOM Enemy Unknown is a mixed of a turn-based strategy game and roleplaying. As the commander of XCOM, a global organisation that is formed to fight the imminent alien threat to earth, you will be busy building your base up, investing money in manufacturing new weapons and upgrades, researching new technologies, and saving humanity from the brink of extinction. Your organisation is funded globally by the big countries around the world so you need to make sure that you use the money wisely (as they will measure your performance every month). Though the game looks complex with all these base management stuffs, it’s actually fairly simple and makes sense. For example, obviously, you need to be able to have fighter crafts to engage UFOs, hire soldiers to send them to battle the invading aliens, get scientist to research new technologies, get engineers to build base buildings and weapons/armors, and so on. 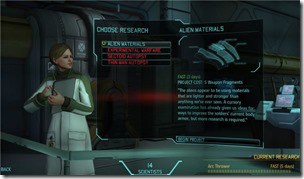 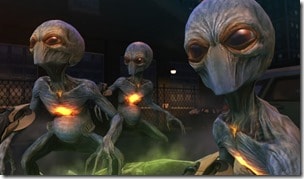 The in-game tutorials with voice acting do a good job in explaining you briefly what needs to be done on each section, so you have a step-by-step understanding what you need to do to progress.

The level of strategy is not too overwhelming but it does keep you thinking on what to build, what to research, and what to do next. The sheer number of options that you can do will definitely bring a different outcome to your battle some time later. Should you research that new armor blueprint to further strengthen your soldiers first? Should you interrogate this funny looking alien you’ve captured earlier to find its weaknesses? Should you use up all your funding to build that awesome new weaponry now? Again, you will hardly have to think hard in making these selections, as they all flow naturally to your play style and also on the current situation.

By building satellites and deploying them to the world regions, you can detect an incoming UFO and also make the countries of that region happy. Each country has a panic level and letting the panic level too high will make them resigned from supporting XCOM. You can decrease the panic level by successfully completing the missions (such as preventing the alien to abduct the population), etc. Once a UFO is detected by one of your satellites, you can send your fighter craft (that you can buy and manage) to engage. With the right armament, you should be able to take a UFO down (or not, depends on the UFO size and a bit of luck). Once a UFO is down, things get interesting because you can send your men (and women) there to kill, capture, and loot. The combat is turn-based although if you put your soldier on “Overwatch” mode, they can have a “once-off” reaction shot during an enemy’s turn. The mechanics of the combat is awesome and it’s the detail that makes the game feels like a polished one. The sound of the starting rifle is menacing, explosions are staggering and pretty, aliens (or your soldier) get thrown off the ground with a direct hit, building crumbles, soldiers break windows before shooting, and the environment design is also quite detailed. Unfortunately, there are no random maps and it doesn’t matter whether you are fighting the aliens in China or Australia. The buildings, trees, and atmosphere are the same. Despite of this, however, I never find them repetitive at all. Soldiers level up and will be assigned (sadly, automatically and randomly) to different classes: Assault, Support, Heavy, and Sniper. Each class has their own abilities and tree levels so you can assign them up according to your play style. You can also customise their loadouts, appearances, and even their names! I personally name my soldiers as my friends and this makes the game more… personal. Just don’t take it too seriously when he/she misses the target during crucial moments. There aren’t many variety of weapons, so there is no M16, AK47, or AUG. They are all named “Assault Rifle”. It simplifies things which can be good or bad. There are other weaponry that you can utilise though such as a pistols, rocket launchers, shotguns, grenades, and some non-conventional weapons later on (not going to spoil anything here). Soldiers can be wounded or died, so make sure you’ve got them covered (the game is using a smart full/half/no cover system and you can even flank the position). Since soldiers can level up, it’s best to keep all of them alive (or you can always cheat a bit and load a game every time your soldier gets hit). Overall, I really like XCOM Enemy Unknown a lot. Its graphics, effects, animations, and physics are well designed and though you will be doing a similar thing over and over, it does not feel repetitive at all. The amount of things that you can research, do, and discover in the game are massive without being overwhelming.

But most importantly, it’s that attachment feeling that you have while playing the game. You feel as if you really care when a country is being terrorised by the alien. You give a big smile when your best friend shoots that critical hit when everyone else is out of ammo. That sense of progress and achievements in saving humanity. Then…. it comes with the “Just one more mission and I will stop” addiction.

It does feel a bit too short however, though you can prolong the game by keep shooting down UFOs and not progressing. I’ve also heard that the ending is a bit disappointing but unfortunately, my savegames got wiped out when I reinstalled Windows 8 (and I was on the final mission!). I’m playing it all over again though, and yet I’m still excited on the second play through. It’s that good.

UPDATE: Just ended the game today actually. Looking forward for interesting mods from the community to install and replay this game in the future. If you love the original XCOM UFO Defense, you will definitely love XCOM Enemy Unknown! This will be a game that I’ll be replaying over and over in years to come.

You can purchase XCOM Enemy Unknown cheaply at CJS CD Keys (I bought mine from there – unlockable at Steam) or through Amazon below.