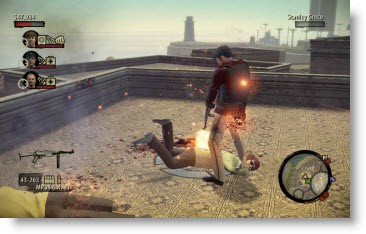 The Godfather II looks like a cut down version of GTA IV (or the GTA series overall). You roam the streets in third person view either on foot or by carjacking some passers by. It’s kinda weird though how you can easily get a new car by simply stopping someone and shouting “I want your car!” or “Nice wheels! I want it” (PS: please don’t do this in the real world).

At some point in the game, you can go between different cities by plane (going to the airport and talk to the “travel agent” lady).

You can recruit several mobsters to join your family and bring them alongside you during the missions. You can only bring 3 of your made men but you can always let the others defend your businesses or send them for missions.  There are six specialties in the game that your crews can consist of:

Their stats and skills can also be upgraded for a price. Or if you feel unhappy with your made men, you can always “mark” them for death (and kill them yourself) so you can recruit new members into your family. Since each man also has different weapon specializations, you might want to send your man to his grave once you’ve met someone better. Ah yes, the power!

The Don’s View is a strategic overview of the world in the eyes of a Don (you). It’s a city map (if you want to put it that way) with all businesses being highlighted for you (and your enemies) to take over. You will be able to see which businesses belong to which families here.

If you manage to take over a whole set of the same business type (say Prostitution), then your family will get a specific bonus. Bonuses are varied such as a bullet proof vest for all of your men (including yourself) or an armored car.

You need to employ guards (paid per day) to guard your businesses (or you can also use your made men to defend them). Each business has a maximum number of guards possible to hire but you don’t have to maximize the numbers. You can always send your made men to defend an attacked turf or you can go yourself to make sure that you don’t lose a business to your enemy.
The Blackhand
You take over the businesses by doing extortions or basically threatening them until they give up and give the business to you. You can grab em, smash em, punch em, kick em, slam em, throw em, you name it. This is called the blackhand (you can perform these tasks by using your mouse movement). Threaten them too long though and they will fight back to the death instead of giving up.

The Godfather II missions are quite repetitive but thankfully, they are fun to do and aren’t frustrating. In fact, the missions are quite easy since your health bar will regenerate as long as you remain hidden for a period of time. Not to mention that you can have a Medic in your team which will replenish you back to full health if your health happens to drop to zero.

Some missions require you to play it yourself and some don’t. For example, you can send your men through the Don’s view to bomb or to take over the businesses. But of course, if you are playing the mission yourself with your team, there is a 90% chance that your mission will succeed.

The Godfather II bugs and issues

The storyline is alright and nothing too exciting. The end game involves killing all the families so basically there were no optional missions as you need to capture all businesses to be able to raid the families. Once you end the game, there is an option to continue with the game but since there are no more enemies left, there are nothing left to do apart from killing innocents or blow cars up just for the fun of it.

Some bonuses are also available only towards the end of the game, making them quite useless as you probably won’t enjoy it long enough.

Occassionally you can get stuck inside a table or a wall, requiring you to load a save game.

The dialogues are very very repetitive so you’ll find the same dialogues being voiced over and over again. Thankfully, the lines aren’t that long.

The AI can be quite stupid sometimes and you will often find these weird anomalies:

The Godfather 2 is a fun mobster style game in third person view. You can look at it as a cut-down version of GTA IV (Grand Theft Auto IV) but it doesn’t mean that it’s a  bad thing. The Godfather 2 is easy to learn and very rarely that I encountered frustrations in the game.

The strategical element is there (managing your families and also your made men) but it’s not much. The storyline is quite blunt and nothing exciting, unfortunately. It basically involves taking over the other families’ businesses, killing them and proving them that your family is the best mob in the country. Doing these chores can be quite repetitive but thankfully the missions are quite varied and best of all, they are fun to play and enjoyable.