It’s been a while since I’ve played Rainbow Six Vegas (the first one) on my PC. I was still using my old video card, GeForce 6600GT back then with low to medium graphics settings :) It was quite a cool game but got repetitive afterwards. Find an enemy, hide, and shoot from your hide-out. Go to the next room and repeat. So I was quite excited that they’ve made the second one.

Rainbow Six Vegas 2 is an FPS (First Person Shooter) game. You are the leader of a small team (a 3-man team) of an international special force organization called Rainbow Six. You can issue simple commands to your team (Go to a certain location, stacking up on doors preparing for an entry, throwing grenades at a certain point, etc) but it will be very minimal and if you really up to a challenge, you can simply ask your team to “Hold position” and do your mission Rambo-style.

As you may have noticed from the title, Rainbow Six Vegas 2 is played on…Vegas. Well luckily, not all of the time though. You’ll be hopping from the casinos to an airstrip, so be prepared for both close quarter combats and long range combats.

Rainbow Six Vegas 2 offers new features such as the A.C.E.S points and Ranks. You’ll gain experience from killing enemies and when you complete an Assault, a Close Quarter Battle (CQB), or a Marksman level. Once you gain experiences, you can be promoted to the next rank of military (sergeant, lieutenant, etc). Being promoted to higher ranks will open up new armors for both appearance and protection. 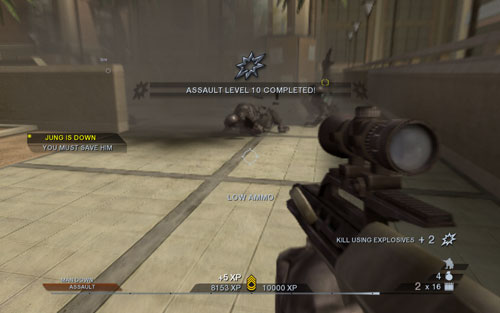 Depends on how you kill the enemy, you’ll gain these points accordingly. For example:

You can find out how to get these points from the main menu.

Your character will “level up” RPG style and although you won’t be gaining any attributes, you’ll gain more arsenal for some killin’ frenzy. Sadly though, when you unlock new weapons, they don’t necessarily better than your old ones. It’d be great if the newer weapons are all better than the one that you are currently using, but some do and some don’t.

After you have access to new armors, clothing, and weapons, you can customize them in-game or on the main menu. You’ll see this on your character in-game, so it’s quite fun actually to customize your character a bit. Nothing much to tell, apart from a big-bad terrorist trying to wreak havoc in the city by taking hostages and bombing stuffs. Very old school and very predictable. However, fun is the key in this game, not the storyline.

Fun is what this game is all about. It’s fun to play, especially once the action starts. Hiding behind covers, throwing grenades, breaching a room, playing it as if you really are in a special force team, are all fun to do.

There are 3 difficulty levels in the game, but I wish there were 4. The realistic mode (the hardest) can get on your nerves as the enemies are more accurate when they shoot. While it can be fun and challenging, sometimes I had to repeat 5-6 times of a certain sub-level (Your game will be saved automatically on a certain checkpoints during a mission, so, No, no quick-saving and loading :)). If you’ve been playing some FPS games, I’d suggest to use the hardest level (Realistic) but when you get frustrated, tone down the difficulty a bit (You only need to repeat that mission and not the entire game!). I think I’ve repeated about 10 times on the final boss (at the end of the game) lol. Or maybe I’m just suck.

The medium difficulty however, is kind of a joke, as you can have 10 grenades instead of 4 and also unlimited ammo :)

The A.I is okay, I guess. It’s not dumb but it’s not the best, either. Your teammates are good on their own and won’t block your path. They’ll find their own cover when the shooting starts.

This goes to the enemies too. They’ll find somewhere to hide, shoot behind covers, keep hiding when being suppressed, and will try to flank you sometimes.

It’s kinda funny though when you start putting your silencer on. It feels as if you are turning on a cheat mode. It’s kinda cool to play stealthily on certain areas and you’ll find that the enemies are dumb enough not to notice your presence. Once you take out that silencer however, one shot from you will invite the whole cavalry. 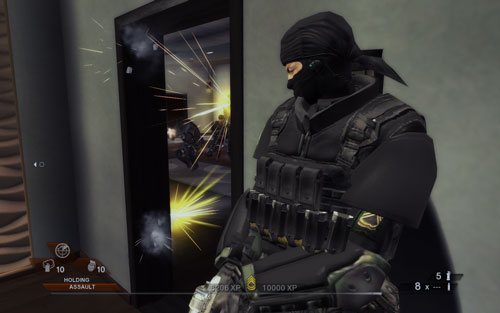 Rainbow Six Vegas 2 offers a new ranking and points system to its predecessor. It also improves what was offered before on the first series. I found that Rainbow Six Vegas 2 single player campaign was quite short (probably as short as Call of Duty 4?). So if you want to buy it, do so but make sure that you’ll play it online too.

Your choice!
If you haven’t read my Call of Duty 4 Review, please feel free to do so.