Now, five years have passed since the launch of Mass Effect 3 and I’m happy to say that I’m enjoying Mass Effect: Andromeda a lot, despite of what you’ve read or heard on the net.

Early feedback from reviewers and Mass Effect fans did deter me a bit from trying Mass Effect: Andromeda but after playing for 30 hours, I’m still totally hooked into the game. Plus, there are more big updates planned to improve the game even further (the last major patch 1.05 fixed a lot of annoyances and complaints that people had with the release). In short, a lot of the “minus” in the game can simply be fixed via software update/patches – but we do wish that all these were included when the game was released, and not after. It feels as if the team were focusing too much on creating more and more contents in the game.

Graphics wise, Mass Effect: Andromeda still manages to capture the magic and atmospheric elements of the Mass Effect universe. Sure, there are better engines out there offering more real-life-like facial characters, but ME: Andromeda actually does not disappoint. For example, I’m not a fan of the default Female Ryder but I’m totally happy with the character I made (after 2-3 times restarting to get that perfect contour in game plus the help of the community from Reddit). 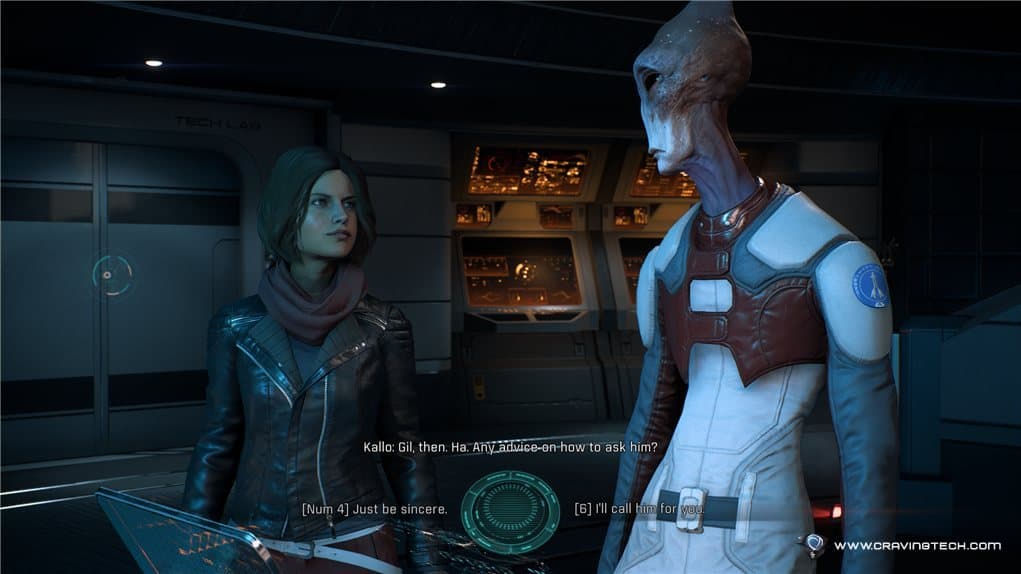 I’m playing ME: Andromeda with my Intel Skylake gaming computer, powered by 32GB DDR4 RAM and an NVIDIA GTX 1080, so I manage to squeeze great amount of details while maintaining high fps (frame per second) in game. As a result, ME: Andromeda is a beauty to look and more immersive to play. The major plot of the story is not its strongest suit, i.e “defeat the evil alien to save the world” kind of story, but it’s the immersion into the universe that truly captivates me. There are variety of different planets to explore and each has their own characteristics –  a diverse of eye candies, to put it short.

As with any other BioWare games, you can pick your own dialogue tree which will trigger different reactions, story branches, and also new quest opportunities.  Progress through the story and more dialogues with your crew will be unlocked. Also, depending on who they are and their gender preference, you can romance them for a bit of fun. Romancing is quite easy and somewhat fast. I personally prefer BioWare’s Dragon Age series where it can take quite a long time to build trusts and relationship with your, ahem, crush (and also the drama when you are caught cheating).

Each team mate(or companion) has their own skills and abilities related to their lore, so it is best to bring along those to complement your specific character build. Most of the time, it is okay though to bring whoever you like along.

I wasn’t a keen of ME: Andromeda companions at first (or at least, when I watched the trailers before the game came out) but after playing ME: Andromeda for some time, they grow on me. I kind of missed some of the strong characters in the previous Mass Effect games but in all fairness, it did take 2-3 Mass Effect episodes to make them shine. There are heaps of abilities you can train to shape your own character and how you want to fight. However, you are not restricted in a sense to a class, because you can swap between them on the fly through Profiles (though you are always restricted to 3 abilities each time). There is also a place to reset your skills with a small fee should you want to try a completely different build. ME: Andromeda has tons of missions to do, tons of things to explore, and tons of things to research and craft. It is a really big game, which can take you weeks if not months to finish (in a good way). And there are tons of contents and voices in game that make it feel like you are living the world and not some random, static, NPCs (non-player characters) being placed as objects.

All quests are thankfully recorded with their locations on your handy maps, along with the quest description. This way, you can just open a map and pick the closest quests to you to complete and click on the next. Though I had like 10-15 quests at some point during the game, they don’t feel tedious and overwhelming to remember. We also have co-op multiplayer which I quite enjoy and the rewards are also connected to your single player game (such as earning materials, loot boxes, etc). You’ll play a mission that you can choose with 3 other people online and battle it all out together to complete the mission. Gain experiences + credits, and you’ll unlock more weapons, consumables, characters, and skills. Mass Effect: Andromeda is a game that every RPG fans would love. It’s rich in lore, has plenty of places to explore, and tons things to do such as side missions and crafting (though you can still play without having to craft much if you are not into it). The graphics look great and every armour + props in-game are detailed in textures. The environment design also adds immersion into the game and there are tons of contents such as NPCs, dialogues, and lore to read through.

Playing Mass Effect: Andromeda is like watching a science-fiction, space exploration movie and you are thrown in the middle of it. It keeps you hooked and every sense of progression feels like an achievement of its own.

Sure, fans of Mass Effect series may be disappointed with some decisions or changes made in this sequel, including a rather bland story line compared to the prequels. However, I personally enjoy playing Mass Effect: Andromeda and have burnt 30 hours of it so far and will not stop playing til I finish it. If you are not a true hardcore fan of Mass Effect or have somewhat forgotten what the prequels felt like, you’ll definitely enjoy ME: Andromeda. Plus, Bioware and EA have listened to the customers and promised to release major updates to make the game even more better.