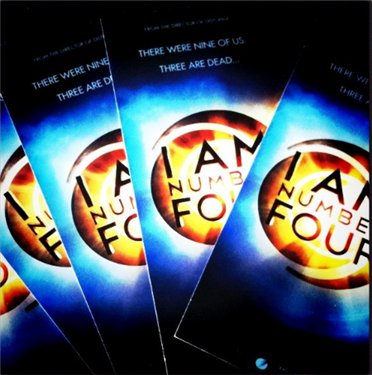 I was invited to watch an advanced screening preview of Dreamworks movie, I Am Number Four, earlier this month and was also given 5 double passes of the movie tickets to give away to Craving Tech readers!

Read more below on how to win the I Am Number Four movie tickets.

I Am Number Four Review

I Am Number Four, if you haven’t heard or watched the movie trailer yet, tells a story of John (played by Alex Pettyfer) who actually comes from another planet (Lorien) which race is being exterminated by another alien race, the Mogadorians. There are only 9 people from Lorien remaining (including John, being number Four) who fled to earth to avoid the total extermination and to preserve their race. Unfortunately, the first three were caught and murdered by the Mogadorians. John is next. The whole movie is all about how John has to survive from the onslaught while falling in love with a lovely girl named Sarah (played by Dianna Agron). Now, it’s up to him to unite the remaining 5 and preserve his race. I Am Number Four feels like a mixed bag movie – romance, sci-fi, and action altogether which should probably go well with a younger audience. The storyline is quite predictable and offers nothing new unfortunately. It feels like Twilight, Smallville, and X-Men combined into a single movie if you want to compare it that way. The effects are pretty good without being overly done but the action starts slow. Not until John discovers the true potential of his power and meets the super hot Number 6 (played by Teresa Palmer) that the action gets interesting. Overall, the movie offers nothing new but a good one to watch if you are looking for some time to pass your evening or weekend. A few illogical decisions are left unexplained; such as: Why the Mogadorians have to kill them in order? With Number 6 appearance, shouldn’t they stop killing Number 6 if they are not supposed to kill her before killing John? And with number 6’s “instant teleportation” power, shouldn’t she be able to kill the Mogadorians easily?

I Am Number Four is a light movie to watch, so you should keep your thinking cap behind and just enjoy the movie as it is. It is entertaining but it is not a movie where you can clap your hands upon.

I Am Number Four Movie Trailer:

Even if the movie is not going to be the movie of the year, there is no reason not to watch it with these double passes tickets! To win a double pass (for 2 people), simply do these steps: