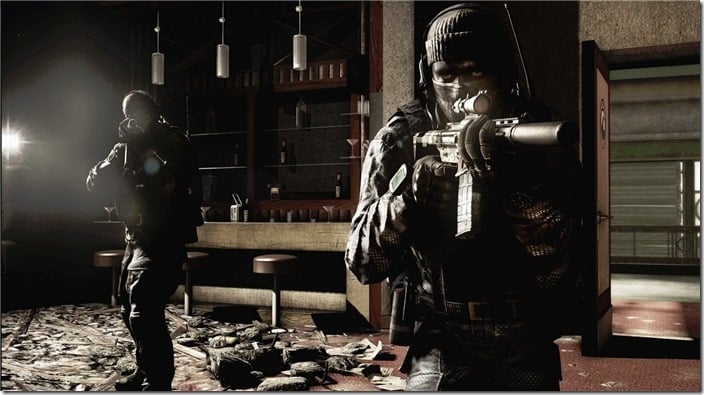 What fans are looking for, is newer, and better Call of Duty game without sacrificing the formula that has made the franchise successful for years – and they’ve got it in Ghosts.

For a start, the new graphics engine is somewhat refreshing. It has better textures, effects, and facial expressions compared to the old Call of Duty engine. I won’t say that the difference is like night and day, but suffice to say, it has a much better feel overall. The single player will take you from one place to another, or should I say, from one extreme to another. In one mission, you’ll be diving underwater with the sharks to take down an entire battleship. On the other, you’ll be floating a la Gravity and shooting bad guys in outer space. Like the previous Call of Duty series, you will be jumping from one character to the next in Ghosts. Thankfully, most of the time you will be playing as Logan, one of the two brothers in the game. There is a sense of character progression and development, but not that much. In the end, I don’t really care much about my character, or any other characters in the game for the matter. Except for Riley, the German shepherd. Riley will help you out in some missions and you’ll even take control of the dog at some point in one of the single player missions. I did enjoy playing the mission but it doesn’t feel like a Call of Duty game, where you just want to shoot and kill someone. However, it does give a different sense of pace and experience. I honestly enjoy the single player campaign, as it offers a wide variety of things to do: sniping (remotely), setting up defenses, and stealth moments that don’t frustrate you. You’ll also be flying a chopper and driving a tank, in case you get bored with the run and gun scenario. The storyline is quite typical with no surprises (good dudes killing bad dudes and a good dude that turns bad, saving the world kind of thing). However, I love how the whole missions integrate from one another seamlessly without having to stare at a loading screen.

The multiplayer is where COD shines. In Ghosts, there are lots of modes to play, including a fun survival mission called Extinction. Thankfully, the zombies are being replaced by fast moving, fierce, aliens. It’s one of the modes I love and I’m sure I’ll be enjoying that more and more (like playing the good, old, Left 4 Dead series).

It seems that first person shooter fans are divided between Call of Duty: Ghosts and Battlefield 4 at the moment. They love one and hate another. In my opinion, they are both good in their own ways. COD Ghosts is faster paced and you can respawn pretty much instantly in most game modes. Battlefield 4 gives a sense of a bigger battlefield and massive combat on epic scale. If you like COD Modern Warfare and COD Black Ops series, you’ll definitely love COD Ghosts. It offers the same formula and experience, which should leave COD fans happy (unless if you expect a radical change). COD Ghosts has a slightly better, newer, graphics engine and more multiplayer game modes available for you to have fun with for many weeks to come. I hope we can change the FOV though, as playing multiplayer with a narrow FOV (console port?) doesn’t give the best experience on a PC. Perhaps another patch for the future.

Disclosure: Call of Duty: Ghosts license was sponsored for the review. Opinions are 100% mine.