Adobe Premiere Elements 9 help you from the start to finish: from importing the media (video, photos, sound files) to sharing your masterpiece both offline and online. Importing the video requires an easy drag and drop process and the new Adobe Premiere Elements 9 also adds more easy import from several camcorders (such as the Flip or DSLR cameras).

Selecting which project settings to use can be a bit daunting and confusing, so this automated suggestion is a welcomed addition.

The interface layout hasn’t changed much and it’s for the better. Playback video is still located on the top left of the interface and the sceneline/timeline is still at the bottom: 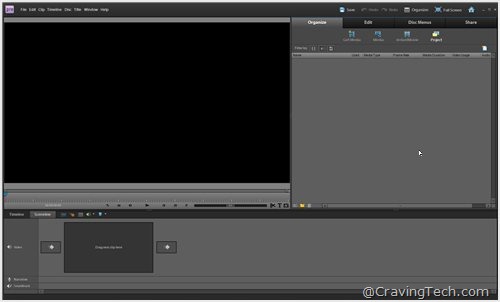 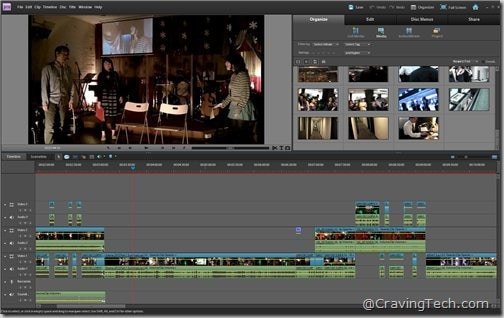 Beginners might want to use the Sceneline if they just want to quickly make a video out of the source files but I’d suggest learning to use the Timeline because it’s much more powerful and you can totally control what you want the final video to be.

Overall, I find that the interface has undergone some minor visual changes and somehow it looks sleeker and professionally more elegant compared to the Premiere Elements 8. They are minor to look at individually but overall more pleasing to the eyes and add a bit more to productivity.

I’ve also been getting a video playback stuttering problem in Adobe Premiere Elements 9 which did not happen in Premiere Elements 8. It happens every time I start adding a subtitle on top of my videos. I posted about this in Adobe forum and someone pointed that having a Still subtitle causes this problem. So the workaround at the moment is to set the subtitle to either Roll or Crawl to bypass this issue (or you can also do a pre-render of that particular timeline). I’ve uploaded a video about the problem in YouTube. Hopefully Adobe has released a patch on this by the time you are reading this review.

A new fun theme gives some fun spices to your video clips by automatically adding transitions and effects:

I’m not really a fan of this one but some people may find it amusing for making family videos. The NewBlue CartoonPlus effect is a cool one to play around though, and gives plenty of customizations, transforming your video into a piece of art:

There is also a new audio enhancement feature in Adobe Premiere Elements 9 that reduces background noise and fixes audio problems for clarity. I did find this new feature to work when the background noise wasn’t too distorted. When I made a wedding interview video for a friend, one of the audio went really bad and noisy, so I had to find a way to reduce the noise. Premiere Elements 9 helped me a little bit but still couldn’t totally remove the crackling noise completely.

You can also create Web DVDs with the new Adobe Premiere Elements 9. It basically allows you to create a DVD interactive experience (with menus and scene selections) online (Flash video).

This is great if you want to burn your movies to DVD but at the same time want to have the same version online. Previously, you may have to create 2 different versions for this purpose. Web DVD makes it totally easy for you. With Adobe Premiere Elements, it’s easy to share your videos online. The latest version adds a capability to share your video straight to Facebook but unfortunately, it’s not in the Share section anywhere. In fact, you have to export your final video to a file first, import it to the Organizer, and share it from there. Not to sure why the team has decided to go for this path.

Oh, starting from version 9, Adobe Premiere Elements is also available on the Mac!