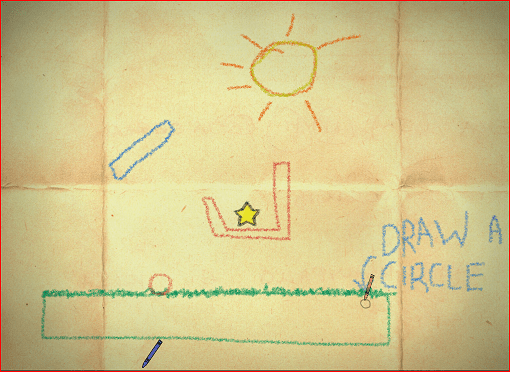 Crayon Physics Deluxe Review – First of all, don’t let the screenshot turns you off. On its first glance, it may look like a game created by a bunch of 5 year old kids getting obsessed with their crayons. Upon a closer look, you will find that the game is actually a ground breaking game that I’ve never even seen before. Crayon Physics Deluxe is a puzzle-based game although simply calling it a puzzle game is an understatement since the game requires your creativity as much as your problem solving skills.

Crayon Physics Deluxe is a game where your inner childhood can be transformed into reality.

Crayon Physics Deluxe’s main objective is fairly simple. On each round in the game, you are required to collect the star with the red ball. The challenge is that you are not controlling the ball directly with your keyboard but by drawing objects on the screen, freely. You draw the objects using the mouse (squares, circles, and any shapes that you can draw) without lifting your crayon finger from the mouse. So you press and hold the left mouse button and start to draw on the screen. Any objects that you draw will fall with the right gravity rule just like in the real life.

Objects that you draw (or the ones that are already on the level) will have interactions to each other. Again, following the rule of physics.

Things will get more interesting later on in the game as you don’t simply draw objects on the sky and let it drop to the ground. You can create wheels (yes you can even create a car if you want) and other interesting bits that will make the game more interesting and challenging.

All will become clear once you’ve seen this video of Crayon Physics Deluxe in action:

Crayon Physics Deluxe looks exactly the same as your kids’ drawings in the kindergarten. It is a compliment and a positive point, don’t get me wrong. The graphic is certainly what Crayon Physics Deluxe should be. It fits well with the theme. And trust me, your drawings won’t be very much different too here :) No 3D effects, no anti aliasing, and no other shiny effects, but pure simple, yet intuitive and fun.

The beauty about Crayon Physics Deluxe is that it doesn’t really have a single answer to every problem. And when it does, it can be as simple as drawing a line and push the ball using your mouse. However, this is not how you are supposed to play Crayon Physics Deluxe! If you do, then you are missing out the fun factor that the game has!

If you are the kind of person who always tries to find an answer as quickly as possible, then you need to take a step back and relax. Even when the answer is so obvious, try to take a different approach to the problem to get a more satisfying result.

However, Crayon Physics Deluxe’s levels can be challenging at times and often you’ll be scratching your head and draw aimlessly on the screen hoping to get some miracle results. It actually reminds me of the old days playing Lucas Arts’ Adventure games. I could spend days simply trying to figure out how to solve a given puzzle in the game. That was back in the 90’s though. I had no internet connection at home back then. If you get stuck with Crayon Physics Deluxe, you can always Google for some answers or search for other people’s solutions in YouTube :) But where’s the fun in all that?

As they always said, “there is a kid in every one of us”. It’s nothing that you should be ashamed of. And you’ll simply love Crayon Physics Deluxe. I’m not really a puzzle game lover but I love Crayon Physics Deluxe. It is a game that you shouldn’t miss simply because it’s so much fun to play. It is a game that you’ve never seen or experienced before!

Crayon Physics Deluxe is innovative and it simply is ground breaking. When you play the game, you can simply sense how much love has been put into the game: the design, the creativity, the soothing music, the animated drawings, and the grin on your face when solving a smart puzzle. It’s not surprising that this game won the Independent Games Festival 2008 Award (even better than World of Goo!). Oh yeah, forgot to mention that it isn’t a 5 year old kid who designed and developed Crayon Physics Deluxe, but a guy named Petri Perho.

The game also has a great replay value with the built-in level editor and you can share the designs to other people over the net. Endless fun!

Is Crayon Physics Deluxe the game for your kids? Maybe. It certainly enhances their creativity and problem solving. Some levels are quite hard though so try not to make your kids too frustrated when they are stuck :D So check it out at CrayonPhysics.com

There are some people who are having graphical issues with Crayon Physics Deluxe (a black screen with the music playing in the background). Make sure that you check the FAQ for the solution or the forum.